On the way up to the mountain village of Nuwara Eliya (about 75 km south of Kandy) we came past tea fields and had a stop where to visit a tea factory.

Different types of tea are grown. Some of the best tea varieties are obtained from the shoots on the tea leaves. Of course, it takes longer to pick these, and these tea varieties are therefore more expensive than traditional ones.
It is mainly descendants of tamils ​​from India who came to Sri Lanka after 1869 to pick tea, which also picks teen today.

We visited a tea factory Labookellie Tea Factory, where we saw the manufacturing process from which the new shots that were picked were dried, sorted and packed. Actually a fairly simple process, such as from picking to packaging can be done in a day.

The price per Kilo for the finished tea is over 20 times greater than what the tea picker gets (= equivalent to about 1 US Dollar per kilogram.)

The next stop was Nuwara Eliya, where the Englishmen liked to stay due to the comfortable temperature.

There are nice buildings from the colonial era. We visited an old governor building, which today is the Grand Hotel and well maintained in the original old style. We went through various nice Victorian-style rooms to the billiard room with 3 large, nice old billiard tables and ivory balls (would not be allowed to produce today).

The local people still use these billiard tables.

We also saw the old post office from the colonial era:

We drove by bus to Nanu Oya, where we went by train to Ella. The train station looks like it did in colonial times, with passenger rooms for 1-, 2- and 3-class passers-divided on men and women. The railroad is built by the Englishmen.

The trains were manually operated on a blackboard. I had a creepy idea of ​​moving the visors a bit (so the train could come earlier), but it seemed the other fellow travelers were a bad idea 🙂

The train ride to Ella took about 2½ hours. There were views of lots of tea plantations, forests and later fine vistas to mountains, valleys with settlements.

We drove through some tunnels built by the Englishmen. 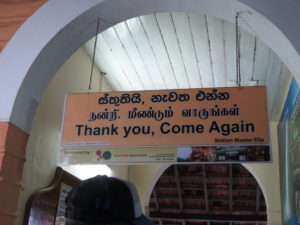 Then there was a short bus ride to our Hotel Heavens Edge in Ella,
The first impression was amazing. It was a pretty new hotel and there was a fabulous nice view from the rooms:

The porcelain was in a nice style:

But gradually we found out that this hotel was build – like so many other hotels in the area – at an incredible speed, thus shoddy workmanship.

Eg. fell the luggage compartment down in the room when I put my suitcase on it. In rain the entire staircase that led from the rooms down to the lobby was wet.